A scaled-up planetary system around a supernova progenitor

A scaled-up planetary system around a supernova progenitor 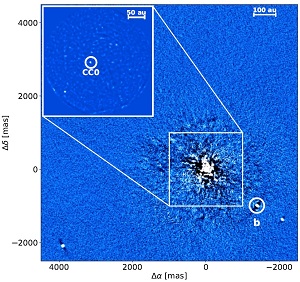 The vast majority of known exoplanets were found around stars with a mass < 2.3 M_sun, and the sharp decrease in the occurrence frequency above 2 M_sun is interpreted — within the core accretion model in which planets form through core growth on timescales of a few million years — as due to the more rapid dispersal of the protoplanetary disk for heavier stellar masses. By targeting 85 B-stars (mass > 2.4 M_sun) in the young (5-20) Scorpus-Centaurus association, using SPHERE/VLT high-contrast imaging, the BEAST project specifically addresses the presence of planets around intermediate and massive stars. After the discovery by Janson et al. (2021) of a 10.9 M_J planet around the stellar binary b Cen with a total mass of 6-10 M_sun, Squicciarini et al. here report the detection of a planetary system around the most massive star to date. μ2 Sco, which the authors establish to be 20 ± 4 Myr old and have a 9.1 ± 0.3 M_sun mass (therefore likely ending its life as a supernova in the future), appears to harbor a 14.4 M_Jup companion at a projected separation and 290 au, and probably a second similar object (18.5 M_Jup) at 21 au. Although the companions are slightly above the planet/brown dwarf limit at 13 M_J, their mass ratio to the star (1.5-1.9 x 10-3) compares well with that of Jupiter (0.95 x 10-3), making the system arguably a scaled-up version of the Solar System. With already two or three planet-like objects detected around the first 25 stars observed within BEAST, the population of planets around massive stars seems richer than anticipated, but such a conclusion will have to be confirmed upon completion of the program. Yet, the formation of such objects remains uncertain. Their mass ratio and location at separations consistent with the expected size of the protoplanetary disks would argue for a bottom-up, planet-like, core accretion formation mode, but this mechanism faces a severe timescale problem. On the other hand, rapid formation (~10^4 year) from top-down, stellar-like, gravitational instability is expected to lead to much higher mass ratios (~0.01-0.1) than observed for the b Cen and μ2 Sco companions, which would imply an unusually low conversion efficiency of disk mass into companion mass.