Until recently, detailed, kilometer-accurate, 3D shape information of asteroids has been limited to bodies visited by spacecraft missions. This situation has changed with the advent of imagers operating at the ~20 mas diffraction limit in the optical, such as SPHERE/ZIMPOL at the VLT. Vernazza et al. report the final results of an ESO Large Programme in which 42 large main belt asteroids have been imaged — out of which 20 of the 23 asteroids have a diameter larger than 200 km — and down to objects as small as ~ 100 km. In addition to remarkable results reported previously on several individual objects, including the evidence for craters that testify of family-forming catastrophic collisions, these observations provide a unique dataset on asteroid shapes and densities (combining the measured volumes with available mass estimates). In particular, they reveal that the departure from smooth shapes is inversely correlated with the objects' volume-equivalent radius; furthermore, there is a bimodality in shape ("spherical" versus "elongated" objects) associated with the rotation period, and a bimodality in density (< 2.2 g cm-3 and > 2.7 g cm-3) reflecting volatile-rich and volatile-poor bodies. Most objects, and especially the volatile-rich ones, appear to be located close to the Maclaurin equilibrium sequence. Finally the low density of some of the C- and P/D-type asteroids may point to an origin in the transneptunian disk.

by F. Louvet, P. Hennebelle, A. Men'shchikov, et al. 2021, A&A, 653, A157 Louvet and collaborators present a systematic study of the effect of spatial resolution on the measured properties, particularly the mass, of dense stellar cores, the smallest gas entities that are currently believed to collapse and form a star, or a multiple star system. The results are chilling. Using both observations and simulations, they find that extracting dense cores from the same molecular cloud at different resolutions (distances) does not produce consistent results. They also find that the mass spectrum of the extracted dense cores is a function of resolution, implying that characterizing the rate of conversion of dense gas into stars is currently out of reach. The authors point out that the much used Gaussian beam deconvolution of imaging data to infer dense core sizes produces highly biased results in this context. The results in this paper have direct consequences on our overall ability to characterize the initial conditions of star formation, providing a warni! ng that it is a more complex task than currently assumed.

Accurate knowledge of the solar elemental abundances is crucial for an extremely broad range of astrophysics research topics, as the chemical composition of essentially all cosmic objects is relative to the solar one. Asplund et al. reassessed the solar abundances of all 83 long-lived elements, using highly realistic solar modeling and state-of-the-art spectroscopic analysis techniques, coupled with the best available atomic data and observations. Their results confirm the persistence of the so-called solar modeling problem, that is a discrepancy between helioseismology and solar interior models calculated with solar metallicity determined from spectroscopy. The results of Asplund et al. strengthen the suggestion of shortcomings with the opacities and/or treatment of mixing below the convection zone in existing standard solar models.

The ALPINE-ALMA [CII] survey: The contribution of major mergers to the galaxy mass assembly at z~5

The ALMA ALPINE survey is a recently completed ALMA large program that is providing new valuable insight into the nature of star-forming galaxies up to z=6. In this work, the authors combine the ALMA observations to multi-wavelength data to study the morphology and kinematics of the ALPINE galaxies with the aim of assessing the importance of major mergers in the process of galaxy mass assembly at early cosmological epochs. The obtained constraints reveal the presence of a significant merging activity in the early Universe. The exact contribution to the galaxy mass build-up at these redshifts and through the cosmic epochs is strongly dependent on the assumption of the merger timescale. If a rapidly evolving merger timescale such as TMM ∝ (1+z) ^−2 is assumed, the results agree well with state-of-the-art cosmological simulations, suggesting a considerable role of mergers in the build-up of galaxies at early times. 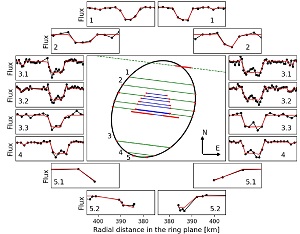 Chariklo was the first small body around which rings were discovered, from observations of a stellar occultation by the asteroid. Besides determining the projected shape of Chariklo, the resulting light curves revealed that additional structures occulted the stellar light and that they appeared to be a system of two rings. Morgado et al. (2021) present observations of an additional eight stellar occultations by Chariklo. These new data not only confirm that Chariklo has two rings but also determine the orientation, width, and eccentricity of each ring, as well as the 3D shape of the asteroid. 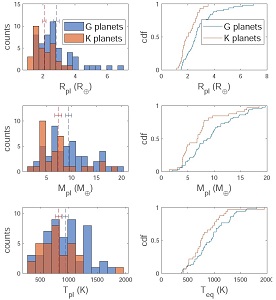 The increasing database of exoplanets allows us to explore how planetary populations vary on stellar mass. For relatively small K and G stars (masses ~< 1.2 M_sun), a study by Pascucci et al. (2018) has suggested that, on average, planetary masses increase almost linearly with stellar mass, with a universal (i.e., independent on the stellar type) peak in the planet-to-star mass ratio. This also means that the radius of the most common planet increases with the stellar host's mass. A well-identified reason for a large planetary radius is a large fraction of volatile material (H-He atmospheres), but other causes are plausible, such as increased thermal inflation or a larger planetary system mass, both of which could be associated to more massive and luminous host stars. Lozovsky et al. examine correlations between stellar mass and various planetary properties for G- and K- stars to sort out these possibilities. Beyond confirming the results of Pascucci et al. on the relation between planetary and stellar masses, they find that the planetary radii do not correlate with equilibrium temperatures, dismissing the role of thermal inflation in the observed trends. Using planetary models of various compositions, they computed mass-radius (M-R) relations and show that, given the flatness of the M-R curves in the range of interest, the typical difference of mass between G- and K-star planets, about 2 M_Earth, is far too small to explain the typical difference in observed radii, about 0.75 R_Earth. In contrast, varying the H-He mass fraction can readily explain the range of planetary radii and the G versus K difference, with the G-star planets being more volatile-rich in comparison to K-star planets. The authors conclude that planets around more massive stars include larger amounts of H-He. This may suggest that planets forming around more massive stars accrete H-He atmospheres more efficiently.

Revisiting the archetypical wind accretor Vela X-1 in depth. Case study of a well-known X-ray binary and the limits of our knowledge

A star as a guide. In this paper, which is more similar to a review in some respects, Kretschmar and collaborators used the X-ray binary Vela X-1 to investigate any aspect of wind accretion limiting our knowledge. Vela X-1 is a bright X-ray source that was discovered by Uhuru, the first X-ray satellite, and the optical companion is a bright (V~6.9) and early O star. We do not miss data at any wavelength. The neutron star spins slowly (~280 s) and orbits the more massive star on a slightly eccentric orbit (~0.1) every ~9 days. This allows the neutron star to act as a probe of the O-star stellar wind and of the accretion process itself. This article triggered a discussion amongst the editors of A&A as well. We welcome this kind of review article on single objects, as a "spoke-object" of its astronomical class.

The chromosphere, which is the layer from which most of the solar radiation at millimeter wavelengths is emitted, is probably the least understood layer of the solar atmosphere. This is true even for the quiet chromosphere (that is, outside strong magnetic field concentrations). In this article the authors used high spatial and temporal resolution ALMA observations of a quiet Sun region at 1.26 and 3 mm and addressed the variability in the quiet chromosphere with a focus on the study of spatially resolved oscillations and transient brightenings, that is, small, weak events of energy release. Both phenomena may have a bearing on the heating of the chromosphere. Their study demonstrated that most fluctuations at 1.26 and 3 mm were related to p-mode oscillations with similar rms at both wavelengths. The oscillations were ubiquitous and provided more than 60% of the total fluctuations. The removal of oscillations from the data revealed several transient brightenings. All of them showed gradual rise and fall time profiles, and only a few had 1600 or 304 \AA\ counterparts. The combined power per unit area of the transients in the two ALMA bands was more than two orders of magnitude smaller than the chromospheric radiative losses. The minimum energy of the 1.26 mm transients was among the smallest ever reported, irrespective of the wavelength of observation, and their occurrence rate per unit area was higher than that of the 3 mm events.

COALAS. I. ATCA CO(1–0) survey and luminosity function in the Spiderweb protocluster at z = 2.16 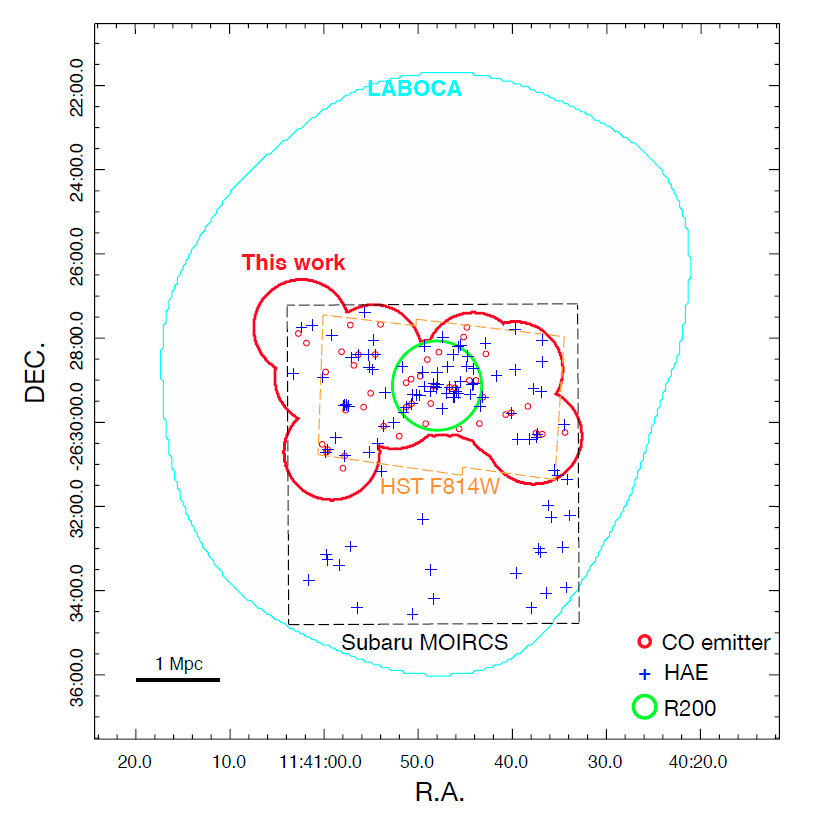 Galaxy clusters assemble and collapse around z=2 in the first half of the life of the Universe, but the process is still not completely understood. The COALAS project obtained molecular gas observations of the Spiderweb protocluster field at z = 2.16. A total of 475 hours of Australia Telescope Compact Array (ATCA) observations cover a large ~5 Mpc region and over 13 000 km/s in velocity. The authors detect CO(1-0) emission in 46 galaxies, which is the largest sample of molecular gas measurements in a protocluster to date.

Half of the CO emitters are gravitationally unbound to the cluster core, suggesting that the cluster core is collapsed while its outer regions are still assembling. One main result is the high proportion of CO-rich galaxies, which are at least ten times more numerous than in the field at the same redshift. This environmental effect reverses what is seen at z=0, where cluster galaxies are gas deficient with respect to the field.