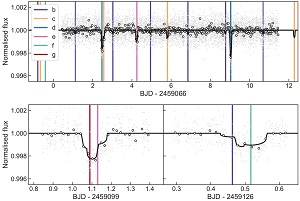 Planets in mean motion resonance chains are expected to be a common outcome of planetary formation. However, few systems have been observed to be in Laplace chains (three body resonance), and, so far, planets in only one system (K2-138) have been measured both in transit and in radial velocity. Recently, the TOI system has received attention as initial measurements with TESS indicated three planet candidates near the 2:3:3 resonance, that is, a potential co-orbital system with two planets oscillating around the same period. Additional data from CHEOPS, ESPRESSO, NGTS, and SPECULOOS, presented by Leleu et al., reveal a much richer system: TOI-178 in fact harbors at least six planets in the super-Earth to mini-Neptune class (radii from 1.15 to 2.87 R_earth, sampling both sides of the Fulton radius valley), and the five outermost planets form a 2:4:6:9:12 chain of Laplace resonances. The system also appears to be remarkably co-planar, with the projected inclinations of the various planets differing by only 0.1°. Another remarkable feature, which differs notably from the TRAPPIST-1 system, is the variation of densities from planet to planet. They range from 0.177 to 1.02 times the Earth density and in a way that is not correlated to the distance from the star, something that would be expected if the differences were due to the primordial gas envelopes being partially removed via evaporation. With these unique features, and given that the star brightness (H = 8.8) will allow further characterization, TOI-178 is likely to become an emblematic system for understanding planetary formation and evolution.