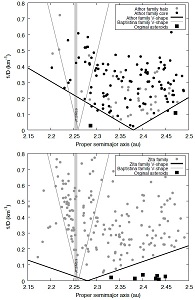 Collisions between asteroids in the main belt are thought to have produced families of fragment asteroids, which are initially on similar orbits. Members of these families disperse with time, changing their semi-major axes due to the Yarkovsky thermal effect. This causes some of them to enter gravitationally unstable zones, leave the main belt and possibly become near-Earth asteroids (NEAs). Establishing the source regions of NEAs is an important but difficult goal. Here, Delbo' et al focus on the sources of the NEAs that have spectroscopic X-types and moderate albedos. Instead of searching for clusters in orbital elements, they have used a novel method that looks for correlations between the orbital semi-major axis and the size of asteroids, as a signature of dispersion by the Yarkovsky effect from a common origin indicative of family membership. They identify two previously unknown families in the inner main belt among the moderate-albedo X-complex asteroids. One is 3 Gyr old, while the other could be primordial, meaning that it may predate the giant planet orbital instability. They also find that the vast majority of the X-type asteroids with moderate albedo in the inner main belt can be ascribed to a small number of families, with only few exceptions that may represent the original planetesimals.