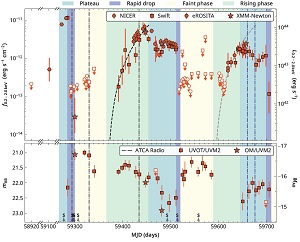 Optical and X-ray wide-field surveys are discovering tidal disruption events coincident with the nuclei of distant galaxies in increasing numbers. These events signal the disruption by tidal forces of a star passing too close to the central supermassive black hole harbored in the center of a galaxy. They are one-time events. After the disruption of the star, the fuel to the black hole decreases and the event dims. In rare occasions, the star can be on an elliptical orbit rather than on a parabolic one. In this case, multiple disruptions are possible, occurring at each periastron passage. Here, Liu et al. report on the eROSITA discovery of a repeating tidal disruption event, likely arising from the partial disruption of a star. Three passages are observed, with the last two monitored in great detail thanks to Swift and NICER observations. The recurrence period is ~220 days. Interestingly, the rise to the peak of the X-ray emission is slow, but the decay is extremely sharp. The authors suggest that this drop might be connected to the disruption of the corona of the accretion disk, mimicking a similar transition observed in smaller accreting black holes in our Galaxy.