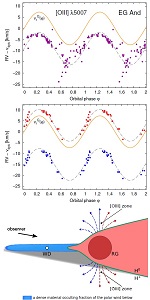 Binary interactions play a crucial role in many aspects of astrophysics, and wind mass transfer is the major interaction for giant binaries with wide orbits, for example those of symbiotic stars. It was proposed a long time ago that the wind may focus toward the orbital plane. The authors investigate the wind distribution in the symbiotic binary EG and by analyzing the line profiles of the H_alpha and [O III] lambda5007 at different orbital phases. The line profiles are disentangled into the following three components: the core emission, the broad wing emission, and the absorption. The orbital variation of the three components provides an independent indication that the wind is substantially compressed to the orbital plane. The results are helpful to our understanding of wind accretion and the nature of symbiotic stars.