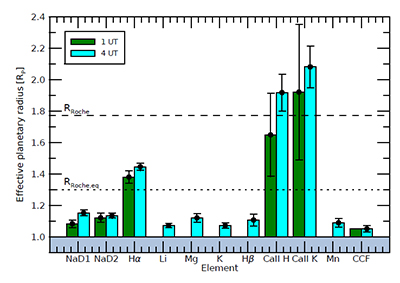 WASP-121b is one of the most studied ultra-hot Jupiters, and it is part of a class of planets that orbit hot stars at short distances, resulting in effective temperatures in excess of 2000 K. Most molecular species in these objects are thermally dissociated into their atomic constituents and their upper atmospheres are presumably subject to intense escape. Previous transit spectroscopy studies of WASP-121b have revealed several atmospheric features due to Fe I, Fe II, Na I, Cr I, V I, and Halpha. Here, Borsa et al. report on a detailed study of WASP-121b with the ESPRESSO/VLT instrument, both in its 1-UT and 4-UT modes, enabling remarkable new findings. The atmosphere is detected in two complementary ways. The atmospheric Rossiter-McLaughlin effect, involving a subtle change in the star velocity during transit associated to absorption by the planet's atmosphere, which is mostly in atomic Fe here, is clearly detected and demonstrates that the atmosphere is predominantly blue-shifted by several km/s due to day-to-night winds. Second, the transmission spectrum shows, either directly or through the cross-correlation technique, that absorption in no less than a dozen of atomic spectral lines, including new detections of Mg, K, Ca II, and, most notably, Li, featuring the first unambiguous detection of lithium in an exoplanet. The Halpha and Ca II absorptions are very prominent, extending close to or beyond the Roche limit, likely probing ongoing atmospheric escape. These observations highlight the outstanding capabilities of ESPRESSO for exoplanetary studies.