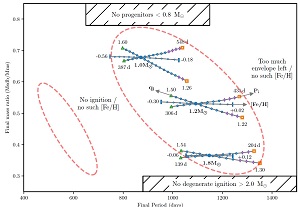 The authors demonstrate, for the first time, that the observed orbital period-mass ratio correlation of subdwarf B (sdB) binaries is caused by the metallicity history of our Galaxy. Metal-rich low-mass stars have larger radii at the tip of the first giant branch (FGB) than metal-poor low-mass stars. Consequently, the stable mass transfer of a metal-rich low-mass donor star ascending to the tip of the FGB leads to the formation of sdB binaries with longer orbital periods. The narrow sdB mass range, the narrow mass ratio range in the original binaries which lead to sdBs, and the Galaxy chemical evolution model, therefore, create the observed strong P-q correlation. We may see similar metallicity effects for other binaries which resulted from stable mass transfer of low-mass red giant donors, and we may expect that the accurately measured properties of the low-mass exotic binaries will provide new constraints on chemical evolution studies of the Galaxy.