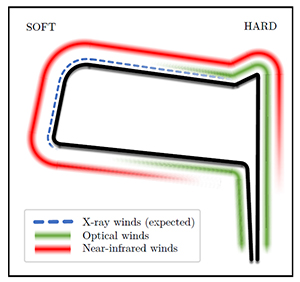 Blue-shifted absorption lines in the X-ray spectra of low mass X-ray binaries (LMXBs) provide the signature of hot winds from their accretion disk, carrying a sizable amount of material away. Cold winds also exist and are observed with the same characteristics in the optical spectra. Hot winds are preferentially observed during the "soft" state of LMXBs, when a disk is present and extends close to the compact object, dominating the X-ray spectrum. Cold winds are instead observed during the "hard" state when the standard accretion disk is pushed further out. Cold winds are revealed by blue-shifted lines in the optical spectra, mainly Hydrogen Balmer lines and He I (5976A). Here, Sánchez-Sierras and T. Muñoz-Darias monitored the evolution of the outburst from the black hole transient MAXI J1820+070 of which seven observations were taken with the X-shooter instrument at the ESO-VLT. These observations encompass the hard-soft-hard outburst evolution. Blue-shifted optical lines were previously observed in the "hard" state of MAXI J1820+070. The near-infrared (NIR) arm of X-shooter turned out to be particularly important on this topic: Blue-shifted Hydrogen Pashen and Brackett lines were observed during soft and hard states. The line shift is similar to what has been observed for optical lines. This result shows that NIR lines can be used to trace the cold wind across the entire LMXB outburst evolution and that cold winds are also present in the "soft" state.