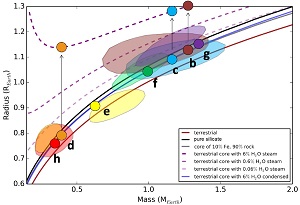 With seven rocky planets on temperate orbits, of which three are considered to be in the habitable zone, the TRAPPIST-1 system is one of the best characterized and fascinating planetary systems. Based on knowledge of their masses, radii, and densities, previous studies inferred that most of the seven planets are likely enriched in volatiles (e.g., water), up to tens of percent of the planetary masses. However, the three innermost planets (TRAPPIST-1b, c, and d) receive more irradiation from the star than the runaway greenhouse limit, implying that all of their putative water reservoir could actually form a steam atmosphere, and it has been shown in a recent study by Turbet et al. (2019) that this situation leads to strong atmospheric expansion. Here the authors apply these concepts to propose revised mass-radius relationships for this class of planets, providing, in particular, empirical formulas for the thickness of the H2O steam atmosphere as a function of planet core gravity and the radius, water content, and irradiation. For a given water-to-rock mass ratio, these new mass-radius relationships lead to planet bulk densities that are much lower than if water is assumed to be in its condensed form, implying that the latter assumption considerably overestimates the planets' bulk water endowment. The application to the TRAPPIST-1 system implies that when assuming a terrestrial core composition, TRAPPIST-1b, c, and d can accommodate a water mass fraction of 0.1-2 %, at most, and perhaps even much less.