Evidence for a rapid decrease of Pluto’s atmospheric pressure revealed by a stellar occultation in 2019 (Arimatsu et al.) 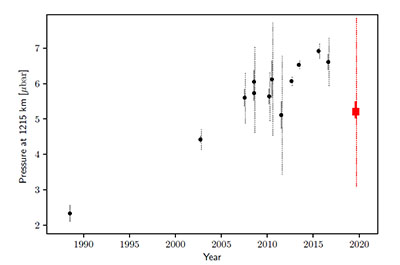 Pluto's atmosphere originates from sublimation-condensation equilibria of surface volatiles, primarily N2. Pluto's strongly elliptical orbit and high obliquity lead to marked seasonal variability of the local insolation. Regular monitoring of stellar occultations over the last 30 years has revealed that although Pluto has been receding from the Sun since 1989, its atmospheric pressure has increased by a factor of ~3 from 1988-2016. Based on climate models, this is best understood to be due to the evolution of insolation over Sputnik Planitia, the largest reservoir of N2 ice on Pluto, and models have predicted that the pressure should progressively decline after 2015, which is a consequence of the subsolar point moving to higher northern latitudes. Using a single-chord stellar occultation observed from Hawaii, Arimatsu et al. determine that Pluto's atmospheric pressure in 2019 was approximately 21% lower than it was in 2016. Although significant at 2.4 sigma only, this result! suggests that Pluto's long-expected atmospheric decline has started, and at a pace faster than anticipated by models, possibly pointing to additional regions of nitrogen ice deposition. Continuing the monitoring of Pluto's atmosphere is needed to confirm the trend and improve our understanding of Pluto's climate and its atmospheric sublimation-condensation cycles.