Mt. Wendelstein imaging of comet 41P/Tuttle-Giacobini-Kresak during the 2017 perihelion arc 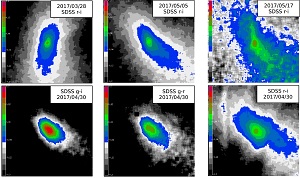 Comet 41P/Tuttle-Giacobini-Kresak (41P), a Jupiter family comet with three discoveries over about 100 years, is in a short-periodic orbit around the Sun with the perihelion close to the Earth distance. The 2017 apparition of 41P offered a long-lasting visibility of the comet at a close distance to Earth. The four month-long imaging campaign with the 2 m telescope at the Mount Wendelstein Observatory was aimed at characterizing dust activity and nucleus properties of the comet. Using a new analysis method of the inner coma flux, we derived a small mean equivalent radius of about 600 m for the nucleus with an unusual body axes ratio that is higher than two. The nucleus rotation axis was determined from the geometric appearance of coma structures, which were enhanced in the images. A long-lasting coma fan was produced by an extended region at high latitudes on the slowly rotating nucleus, whereas isolated jets originated from narrow, low latitude active regions on the nucleus. The dust activity of 41P, despite being difficult to quantify exactly because of an unknown phase function correction for the comet, indicates a steep radial profile that falls off with an increasing distance from the Sun. Colors and flux profiles provide evidence for dust fragmentation in the inner coma of the comet. A singular outburst event created various dust structures in the coma. The outburst came from an extended region on the nucleus and was due to either a landslide on the nucleus or a sudden material release from a subsurface pocket of volatile ice.