The origin of tail-like structures around protoplanetary disks 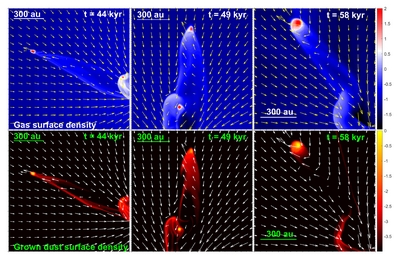 The origin of the enigmatic tail-like structures recently detected around the disks of several young stars was studied using numerical hydrodynamics simulations. Two possible formation mechanisms were considered: ejections of gaseous clumps from dynamically unstable protostellar disks and close encounters between quiescent protoplanetary disks and intruder stars. The authors demonstrate that ejected clumps produce a unique type of tail that is characterized by a bow-shock shape. Such tails originate from the supersonic motion of clumps ejected through the dense envelope that often surrounds young protostellar disks. On the other hand, close encounters between an intruder star and a protoplanetary disk produce three types of such tail-like structures. The authors define these as pre-collisional, post-collisional, and spiral tails. These tails can be distinguished from one another by particular features of the gas and dust flow in and around them. The estimated mass of gas and dust in the tail can amount to tens of Jovian and Earth masses, respectively, which is higher than what was inferred for similar structures in SU Aurigae and FU Orionis. The authors argue that tail-like structures around protostellar and protoplanetary disks can be used to infer interesting phenomena, such as clump ejection or close encounters. In particular, the bow-shock morphology of the tails could point to clump ejections as a possible formation mechanism.