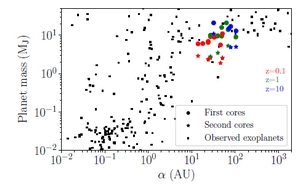 Around 30 percent of the observed exoplanets that orbit M dwarf stars are gas giants, which are more massive than Jupiter. The origin of these planets is uncertain since M dwarf disks are not massive enough for core accretion, that is, the coagulation of dust particles to progressively larger aggregates and eventually planets, to operate. In this paper the authors examine the possibility that such planets form by the alternative theory of disk instability. They performed an ensemble of hydrodynamic simulations of M dwarf disks in order to determine the minimum disk mass needed for gravitational fragmentation to occur. They find that a relatively high disk-to-star mass ratio is required of at least 0.3. The resolution of the simulations presented is high enough to determine the initial properties of the planets formed by disk instability. The planets form quickly (within a few thousand years) at distances around 50 AU from the host star, and they are initially very hot; their centers have temperatures up to 12,000 K. The authors argue that future observations of massive M dwarf disks or planets in very young M dwarf systems will establish the importance of disk instability for planet formation around low-mass stars.