NGC 6240: A triple nucleus system in the advanced or final state of merging (Kollatschny et al.)

NGC 6240: A triple nucleus system in the advanced or final state of merging 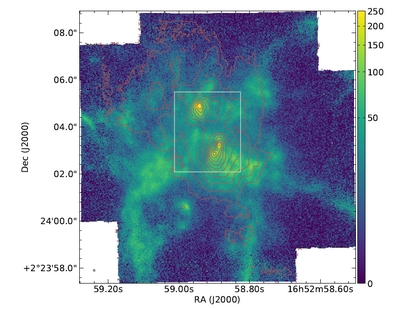 NGC6240 is a well known, nearby pair of merging galaxies. Optical, X-ray, and radio observations have shown that each galaxy of the pair hosts an active nucleus. MUSE on the VLT in the narrow-field mode with adaptive optics has allowed the authors to carry out a detailed optical 3D spectroscopic study with the very high spatial resolution of 75 mas (35 pc). The emission and absorption spectra, along with their dispersion, led the authors to claim that NGC6240 is, in fact, a system of three nuclei in the final state of merging. The southern component is indeed composed of two nuclei that are only separated by 198 pc. In combination with Gaia data, they reach an absolute positional accuracy of only 30 mas, which is essential to compare optical spectra with MERLIN/VLBA radio positions. In the NGC6240 system of three nuclei, two of them are active and all of them have a black hole mass in excess of 9 x 10^7Mo. This provides some insight into hierarchical galaxy formation via merging processes: It is known that multiple mergers lead to a faster evolution of massive galaxies in comparison to binary mergers. Triple massive black hole systems may accelerate the coalescence of a massive black hole, leading to the loudest sources of gravitational waves in the mHz regime.