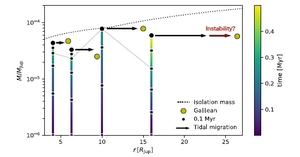 The formation of massive moons around giant planets, such as Jupiter and Saturn, is believed to take place in gaseous circum-planetary disks (CPDs), in a manner analogous to the formation of planets around stars. As a matter of fact, the jovian moons share many similarities with compact super-Earth and terrestrial-mass planet systems around solar-type stars and M-dwarfs. Yet, it remains unclear how the solid material needed to build the moons is brought to the CPDs of giant planets, as well as how the moons subsequently form and evolve out of this material. In this study, the authors show that planetesimals initially orbiting in the vicinity of a giant planet can be gravitationally captured when they interact with the gaseous CPD and experience, in most cases, sufficient frictional heating to be efficiently ablated, thereby feeding the planet’s disk with small dust grains. The authors demonstrate that the moons then mainly grow by accreting the pebbles that coagulate from the dust released via the ablation of planetesimals, and they rapidly migrate inward due to their tidal interaction with the gaseous CPD, resulting in their pile-up in resonant chains at the inner edge of the disk. Dynamical instabilities in these resonant chains could be at the origin of the different architectures of Jupiter’s and Saturn’s moon systems. This scenario is a direct analogy of the one proposed for the formation of super-Earths.