Explaining the low luminosity of Uranus: a self-consistent thermal and structural evolution (A. Vazan et al.)

Explaining the low luminosity of Uranus: a self-consistent thermal and structural evolution 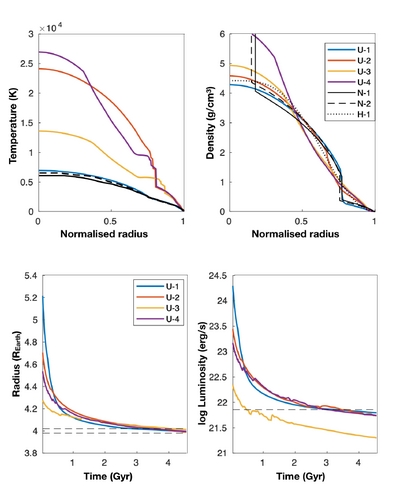 Unlike Jupiter, Saturn, and Neptune, which emit 1.7-2.6 times more energy than they receive from the Sun, Uranus has very low-to-zero intrinsic flux. This long-recognised feature has not been given any satisfactory explanation thus far. The low luminosity of Uranus indicates that its interior is non-adiabatic; either its internal energy has been lost or it remains captured in this interior. The former scenario is unsatisfying as it seems hard to understand why Uranus' interior would already be cold while the other outer planets remain in a cooling phase. Vazan and Helled explore the second possibility and, specifically, that a compositional gradient acts as a thermal boundary, isolating the inner hot region from the outer atmosphere, suppressing convection, and slowing down the cooling. They show that different types of composition gradients are stable over the planet's evolution time and can explain Uranus' observed radius, moment of inertia, and luminosity — without the need for artificial thermal boundaries. They also find that the initial energy content of Uranus was at most 20% of its accretion energy nd that convective mixing is limited in Uranus' outermost region. In contrast to Jupiter and Saturn, the atmosphere of Uranus today may not be very different from that of its primordial state.