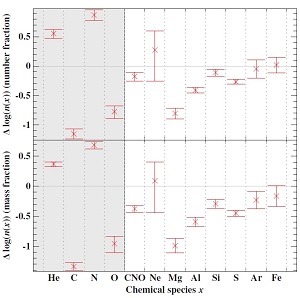 Very recently, the single-lined spectroscopic binary system LB-1 at a distance of 2.3kpc (inferred from the Gaia DR2 parallax) was claimed to contain a black hole of about 70 solar masses. This result is surprising, and would be completely at odds with current stellar evolution models as these do not predict such massive black holes in an environment that is as metal-rich as the Galactic solar neighborhood. In this Letter, the authors present a quantitative spectroscopic analysis of the visible component in LB-1 which reveals that this object is not an ordinary main sequence B-type star as previously assumed. Instead, the derived abundance pattern shows heavy imprints of hydrogen burning via the CNO bi-cycle, indicating that it is actually a stripped helium star. This result overturns the previous interpretation: the revised nature of the visible component significantly lowers the mass estimate to for the unseen companion, allowing values as low as 2-3 Msun; this is no longer in contradiction with stellar evolution models. The exact nature of the companion remains ambiguous for the time-being: it could be an ordinary black hole, a (massive) neutron star, or even a relatively unevolved main sequence star.