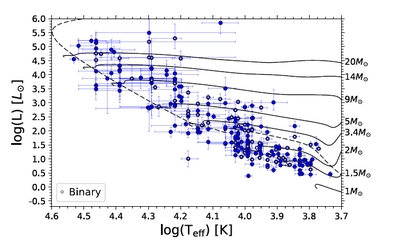 The authors use Gaia Data Release 2 (DR2) to place 252 Herbig Ae/Be stars in the HR diagram, and investigate their characteristics and properties. They provide masses, ages, luminosities, distances, photometric variabilities, and infrared excesses homogeneously derived for the most complete sample of Herbig Ae/Be stars to date. The authors find that high-mass stars (B-type above 7M⊙) have a much smaller infrared excess as well as a much lower optical variability compared to lower mass stars, and that ∼25% of all Herbig Ae/Be stars are strongly variable. They note that the strongly variable objects display doubly peaked Hα line profiles, indicating an edge-on disk. This supports the hypothesis that the variability is in most cases due to asymmetric dusty disk structures seen edge-on, as also observed in A-type UX Ori stars. While the break in dust properties occuring at 7M⊙ hints at different disk-dispersal mechanisms in A and B-type stars, various properties in the UV and optical spectral ranges differ at about 3M⊙ instead. This suggests that different accretion mechanisms are at work in low and high mass stars.