Brown dwarf companion with a period of 4.6 years interacting with the hot Jupiter CoRoT-20 b

Brown dwarf companion with a period of 4.6 years interacting with the hot Jupiter CoRoT-20 b 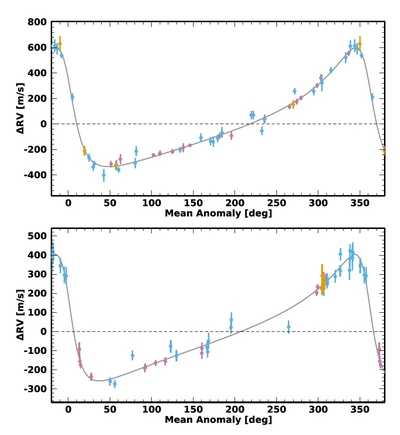 The CoRot-20 star is known to harbor a very high density transiting giant planet (CoRoT-20b) on a highly eccentric 9.24 day period orbit. Using six years of radial-velocity measurements with SOPHIE and HARPS, Rey et al. now report the discovery of a brown dwarf companion (CoRoT-20c) in the system. The new object has a minimum mass of 17 Jupiter masses, and an orbit with a 4.6 year period and 0.60 eccentricity. This is the first identified system that has an eccentric hot Jupiter and an eccentric massive companion. The discovery provides a plausible explanation to the high eccentricity of CoRoT-20b, with the Lidov-Kozai mechanism as a likely trigger of the planet migration. Knowledge of the mass and orbital properties of the new companion could be potentially improved based on transit-timing variations (TTVs) of CoRoT-20b. and astrometric observations of the host star with Gaia.