3D shape of Orion A from Gaia DR2 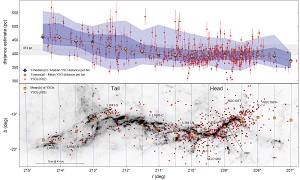 The authors infer the 3D shape and orientation of the benchmark giant molecular cloud Orion A using Gaia DR2 distances for approximately 700 selected mid-infrared young stellar objects in the cloud. They discovered that Orion A is not the straight filamentary cloud seen in the plane of the sky, but instead it is a bent cometary-shaped cloud oriented towards the Galactic plane, with two distinct components. The cloud has a dense head essentially on the plane of the sky, that is forming stars at a high rate (the ONC region). The cloud’s tail, however, which shows a lower star-forming rate, is about ~70deg inclined along the line-of-sight (the L1641/L1647 region). Much of the tail structure is pointing away from us, meaning that the true extent of Orion A is not the projected ~40 pc but actually ~90 pc. This makes it by far the largest molecular cloud in the local neighborhood. Its aspect ratio (~30:1) and high column-density fraction (~45%) make it similar to large-scale Milky Way filaments (“bones”), despite its distance to the galactic midplane being an order of magnitude larger than is typical for these structures.