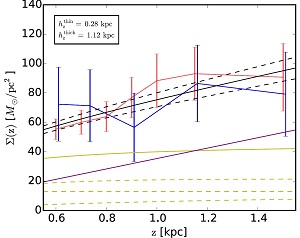 Many estimations of the volumic mass density of the Milky Way in the solar neighborhood have already been made from a detailed census of the vertical dynamics of the stars, in order to derive the local dark matter density. Now with the first GAIA data release (TGAS), positions of stars and their proper motions have increased by almost a factor of two in precision, and most importantly, the sample of stars involved is nearly 20 times larger. It is, then, timely to revisit these estimations. The authors have studied the kinematics of red clump stars in the solar neighborhood by combining data from TGAS and RAVE. They applied the axisymmetric Jeans equations to subsets of stars representing the thin and thick disks to determine the local distribution of mass near the disk of our Galaxy. They determine two values of the z-force, Kz, for the thin and thick disks at 1.5 kpc away from the Galactic plane, assuming scale heights of 0.28 kpc and 1.12 kpc respectively. These measurements can be translated into a local dark matter density of 0.018 +/- 0.002 M_sol/pc^3, which is in very good agreement with previous estimations. However, the statistical error above is an underestimation of the actual uncertainty, which is dominated by systematic errors due to various assumptions (equilibrium or breathing of the stars, the nature of the various components, the interstellar mass, etc). A slight error of only 10% on the scale height of the thin disk leads to a 30% change in the value of the dark matter density. Future Gaia data releases will characterize the different stellar components in the Galaxy better and more precisely, and thus allow more precise determinations of the density.