The CARMENES search for exoplanets around M dwarfs. HD147379 b: A nearby Neptune in the temperate zone of an early-M dwarf 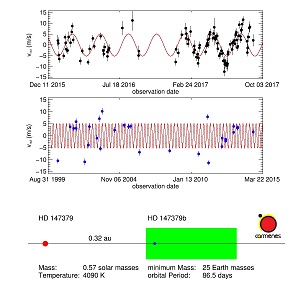 A first planet for CARMENES! The closest planets to our solar system orbit M dwarfs. It is likely that the closest planets with liquid water on their surface also orbit M dwarfs. CARMENES is a spectrometer located in Calar Alto (Spain) which is dedicated to the follow-up of these faint stars using radial velocimetry in the infrared. This article by Reiners et al. present its first detection of such a planet around an M-dwarf: a Neptune-mass planet with an orbital period of 86 days around a 0.5 solar mass star. This may herald many more planets to be discovered thorough exploration of our galactic neighborhood.