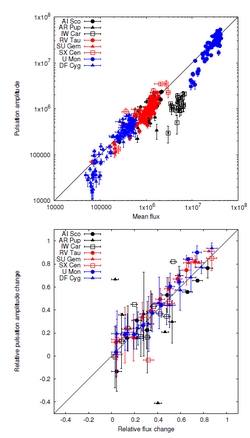 RV Tauri-type variables are pulsating post-AGB stars that evolve rapidly through the instability strip after leaving the asymptotic giant branch. Their light variability is dominated by radial pulsations. Some members of the RVb subclass show an additional variability in form of a long-term modulation of the mean brightness, for which the most popular theories all assume binarity and some kind of circumstellar dust. In this paper, the authors use long-term photometric data to address whether the amplitude modulations are consistent with the dust obscuration model. They find a correlation between the pulsation amplitude and mean flux, which scale linearly with each other over a wide range of fluxes and amplitudes. In other words, the pulsation amplitude remains constant when measured relative to the system flux level. The amplitude attenuation is therefore naturally explained by periodic obscuration from a large opaque screen, most likely caused by a circumbinary dusty disk.