Fibers in the NGC 1333 proto-cluster

Fibers in the NGC 1333 proto-cluster 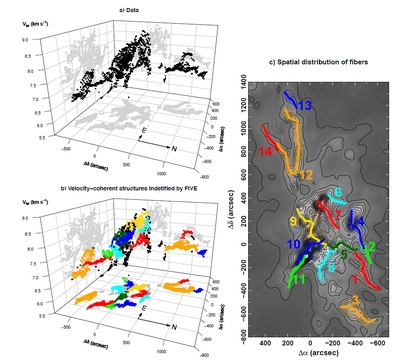 The authors carried out a high-sensitivity study of the internal structure, density, temperature, and kinematics of the dense gas content in the Perseus embedded cluster NGC1333 to investigate the initial gas properties in young proto-clusters. They identified 14 velocity-coherent, (tran-)sonic structures within NGC1333, with physical and kinematic properties that are similar to those of quiescent, star-forming fibers previously identified in low-mass star-forming clouds. These fibers are arranged in a complex spatial network, build-up the observed total column density, and contain the dense cores and protostars in this cloud. From a comparison with Taurus, they propose that the observational dichotomy between clustered and non-clustered star-forming regions might be naturally explained by the distinct spatial density of star-forming fibers in these environments.