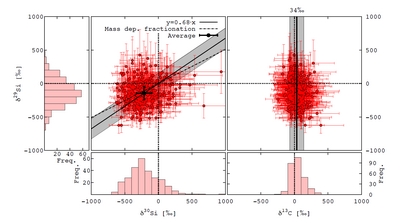 The heterogeneity of comets as carriers of primordial abundances is highlighted by the identification of the silicon isotopic ratio variations between comets - especially from this detailed, in situ study. Most importantly, the isotopic ratios point to different origins, espcially among the AGB stars and supernovae. While this has been known for some time from meteorites, this study is a first for the in situ sampling of a comet (thought to be the most primitive material in the solar system). It is important that the silicon is a far less chemistry-dependent tracer of the source(s) than the CNO isotopes.