A narrow, edge-on disk resolved around HD 106906 with SPHERE

A narrow, edge-on disk resolved around HD 106906 with SPHERE 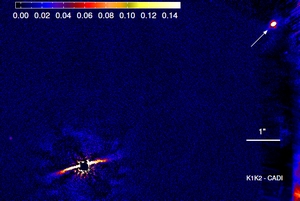 HD 106906 is a young spectroscopic binary star with a total mass around 2.5 solar masses. It hosts the most distant planetary companion thus far. Indeed, HD 106906 b has a mass that is at most 11 times Jupiter's mass and a projected separation of 650 au! Because of its infrared excess, It was also suspected that HD 106906 possesses a circumstellar debris disk. Observations by SPHERE at the VLT presented by Lagrange et al. have revealed, for the first time in a binary system, the disk seen edge-on and the far-away planet. The disk in fact has a ring structure that extends from about 40 au to 110 au, but it is not axisymmetric. The planet could have an inclination of 20°, if it is indeed 650 au from the central stars. Alternatively, if it is in the same plane as the disk, it would have to be separated by 2000 au. Does the planet have a very high eccentricity that brings it back inside the disk? Or could its orbit have been affected by close encounters, such as the recently announced putative ninth planet in the solar system? Or was it formed directly there as a star by direct gravitational collapse? What is responsible for carving out the inner disk or for its asymmetry? This system is a unique opportunity to learn about the formation of planets and their dynamical evolution in binary systems.