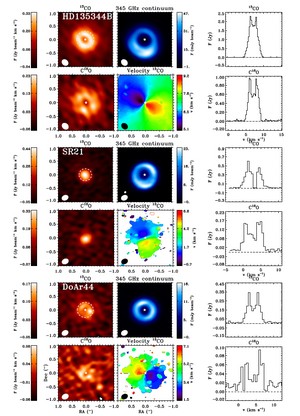 Models of planet-disk interaction predict that young planets clear a gap in the gaseous protoplanetary disk while trapping dust at larger radii. These cavities are observed in some transition disks, but other physical mechanisms might also be responsible for them. The authors present high spatial resolution ALMA observations of 13CO and C18O 3–2 or 6–5 lines of four well-studied transition disks around pre-main-sequence stars with large dust cavities. The line and continuum observations are used to set constraints on the gas surface density, specifically on the cavity size and density drop inside the cavity. The gas cavities are found to be up to three times smaller than those of the dust in all four disks. Model fits indicate that the surface density inside the gas cavities decreases by a factor of 100 to 10000 compared with the surface density profile derived from the outer disk. The data can be fit by either introducing one or two drops in the gas surface density or a surface density profile that increases with radius inside the cavity. The resolved measurements of the gas and dust in transition disk cavities support the predictions of models that describe how planet-disk interactions sculpt gas disk structures and influence the evolution of dust grains. These observed structures strongly suggest the presence of giant planetary companions in transition disk cavities, although at smaller orbital radii than is typically indicated from the dust cavity radii alone.