Based on the article “Outer structure of the Galactic warp and flare: explaining the Canis Major over-density”, by Y. Momany et al.

(To be published in Astronomy & Astrophysics. )

This press release is issued as a collaboration with the Italian Institute for Astrophysics (INAF) and Astronomy & Astrophysics.

While analysing the complex structure of the Milky Way, an international team of astronomers from Italy and the United Kingdom has recently derived the shape of the Galactic outer stellar disc, and provided the strongest evidence that, besides being warped, it is at least 70% more extended than previously thought. Their findings will be reported in an upcoming issue of Astronomy & Astrophysics, and is a new step in understanding the large-scale structure of our Galaxy.

Using the 2MASS all-sky near infrared catalogue, Yazan Momany and his collaborators reconstructed the outer structure of the Galactic stellar disc, in particular, its warp. Their work will soon be published in Astronomy & Astrophysics. Observationally, the warp is a bending of the Galactic plane upwards in the first and second Galactic longitude quadrants (0<l<180 degrees) and downwards in the third and fourth quadrants (180<l<360 degrees). Although the origin of the warp remains unknown, this feature is seen to be a ubiquitous property of all spiral galaxies. As we are located inside the Galactic disc, it is difficult to unveil specific details of its shape. To appreciate a warped stellar disc one should, therefore, look at other galaxies. Figure 1 shows a good example of what a warped galaxy looks like. 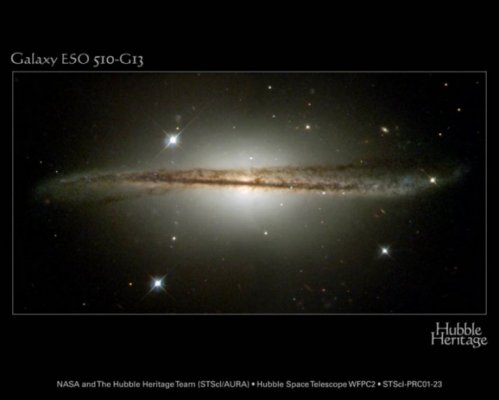 Fig. 1. An edge-on view of the ESO 510-G13 warped galaxy. Courtesy of NASA, the Hubble Heritage Team, and C. Conselice.


The disc of our Galaxy is made up of three major components: the stellar, the gaseous, and the interstellar dust components. The warping of the gas and dust component has been well established and documented. In particular, the gaseous component is known to be warped and to extend out to 25,000 parsecs (pc). In contrast, the true extent of this stellar warping is still being debated. Over the past years, there has been changing evidence of a difference in the warp amplitude between stars and gas. These studies have led to the idea that the Milky Way stellar disc is truncated beyond 14,000 pc from the Galactic centre.

The new analysis by Momany and his team provides the first clear and complete view of the outer stellar disc warp. They analyzed the distribution of over 115 million stars from the all-sky 2MASS catalogue that comprise the totality of the Galactic disc. Among the many different stellar types, M-giant stars were found to be the ideal stellar tracer for reconstructing the outer disc structure. They are, in fact, highly luminous but relatively cool and evolved stars, and these unique properties allow better determination of their distance. The analysis also shows that M-giants stars located at distances between 3,000 and of 17,000 pc from the Sun draw the same stellar warp signature. This means that a global and large-scale Milky Way feature has been identified to about 25,000 pc from the Galactic centre: the team thus clearly demonstrates that there is no truncation of the stellar disc beyond 14,000 pc. The figures below illustrate the shape of the Galactic outer stellar disc. Figure 2 shows the density maps as derived from the 2MASS M-giant sample at 14,000 pc from the Galactic centre. The presence of the warp is quite clear at both ends of the stellar disc. Figure 3 quantitatively shows the amplitude and orientation of the disc’s stellar warp as a function of the Galactic longitude. It also shows the consistency of the warp signature in the three disc components (gas, dust, and stars). It is a natural consequence of the close physical correlation between these three Galactic disc components, and proves once more the existence of a global and regular warp signature for the Galactic disc. 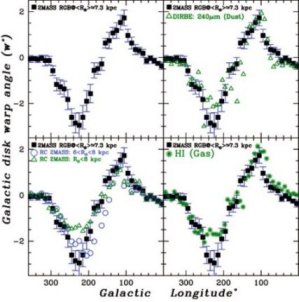 Fig. 3. The stellar warp as derived from 2MASS M-giant stars at 14,000 pc from the Galactic centre (black filled squares) compared to the gaseous and interstellar dust warp (green triangles and asterisks).
Last but not least, this new evidence of an extended and warped Milky Way stellar disc allows the team to solve a heated debate among astronomers. In the past years, astronomers have identified over-densities in the opposite direction to the Galactic centre. Located in the Galactic plane, they stretch over 100 degrees in Monoceros constellation. Known as the Monoceros Ring, this over-density was believed to be the remnant of a dwarf satellite galaxy cannibalised by the Milky Way. Another well-known example exists in the Sagittarius constellation of how the Milky Way halo is continuously building up by means of cannibalised smaller galaxies. Recently, an over-density located in Canis Major was associated to the Monoceros Ring and identified as the core of a satellite galaxy currently being accreted into the Galactic plane. Momany and colleagues’ work, however, casts serious doubt on this scenario. They show that the Canis Major over-density is easily explained by the imprint of the Galactic warp. They may also be able to explain the Monoceros Ring by the complex structure of the outer disc, but they cannot offer a definite conclusion about this issue yet, as very little is known about the Monoceros Ring. It seems, however, that the Sagittarius dwarf remains the only example we have for the moment of how our Milky Way is still growing by cannibalising smaller galaxies.