An ALMA survey of submillimeter galaxies in the COSMOS field

An ALMA survey of submillimeter galaxies in the COSMOS field: Multiwavelength counterparts and redshift distribution 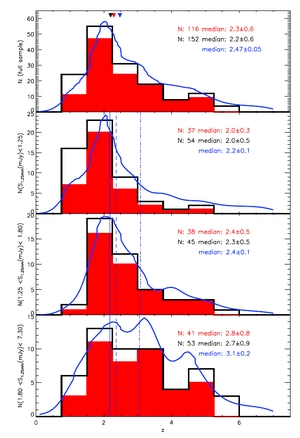 Submillimeter galaxies (SMGs) represent a key population of high redshift star-forming galaxies shedding light on the epoch of galaxy assembly and peak star formation. Surveys of SMGs began in 1997 with sensitive bolometers such as SCUBA, but on single dish telescopes with wide beams, leading to confusion of sources. Recently several SMG surveys in the southern hemisphere with ALMA have shown how previous sources may split into several objects. Their redshift distributions varied from one to six, with a median of around two but with large variations due to different selection biases. This work presents ALMA observations of 129 fields in the COSMOS region at 1.25 mm, detecting 152 galaxies. The sources were selected from a sample of 129 SMGs that were initially discovered with the AzTEC camera on ASTE telescope, and are now identified with high resolution 1.25 mm ALMA imaging. Together with the multiwavelength photometric data available in COSMOS, this survey can now identify SMG counterparts and determine their photometric redshifts. The results are consistent with several previous submillimeter galaxy surveys, and show a median redshift of z=2.48. In addition, 33 AzTEC sources have been resolved into multi-component systems and our redshifts suggest that nine of them are likely to be physically associated.