Increasing exchanges between A&A and arXiv (May 2014)

EDP Sciences has developed new software tools to be used in arXiv.org projects.

Authors who submitted their manuscript to arXiv can now provide the arXiv ID of their paper. Once the article is published in A&A, a DOI/arXiv ID mapping list is automatically sent to arXiv. arXiv.org will then add on the e-Print record of the article a link to the A&A published version of their article.

This will of course increase the incoming traffic to their A&A paper and will help authors to have their research widely disseminated to the community.

The A&A team always strives to offer its authors an ever-increasing range of services.

A button “Send to my Kindle” is now available in addition to the different electronic formats.

You can now send directly your selected A&A article to your Kindle device as a PDF.

Call for Candidates for Associate Editor of A&A (April 2014)

The Board of Directors of Astronomy & Astrophysics invites applications for two positions of Associate Editors that will become vacant on January 1, 2015.

The positions to fill are in the following broad research areas:

Download the Announcement from the A&A Board of Directors

Call for Candidates for Managing Editor of A&A (April 2014)

The Board of Directors of Astronomy & Astrophysics invites applications for the position of Managing Editor, which will become vacant on January 1, 2015.

The position has two complementary aspects:

Download the Announcement from the A&A Board of Directors

EDP Sciences is pleased to announce the introduction of the ePUB digital format for all A&A articles.

We have extended our existing suite of publication formats (PDF, HTML) to include ePUB, offering a range of formats to suit our readers varying needs.

ePUB is a format used for digital documents, it will allow scientific articles to be read on most of specialized eReaders and tablets.

The ePUB version will allow to download scientific texts and to read them very easily in an offline environment. ePUB adapts to suit different screen sizes, making for optimum text display and greater reading comfort.

We also plan to add, in following weeks, a button “Send to my Kindle” in addition of the different electronic formats.

For a free trial or additional information: This email address is being protected from spambots. You need JavaScript enabled to view it.

EDP Sciences and Astronomy & Astrophysics are glad to announce the “3rd Scientific Writing for Young Astronomers”, which will be held in Tihany, Hungary, from 24th to 28th August, 2014.

The direct purpose of organizing an “Astronomy and Astrophysics School” is to teach beginning PhD Students how to express their scientific results through correct and efficient science writing. In other words, how to write scientific papers for different forums (journals, proceedings, thesis manuscripts, etc.)

EDP Sciences and A&A are pleased to announce their sponsoring “LISA VII, Open Science at the Frontiers of Librarianship” (Naples, 17-20 June 2014).

Library and Information Services in Astronomy (LISA) is a series of scientific meetings for librarians and scientists that aims to provide a platform to discuss state-of-the-art maintenance, retrieval, delivery, and preservation of information, and to learn from invited experts in which direction our profession is evolving.

LISA conferences cover a variety of topics such as the organization and management of books, journals, and specialized materials; electronic publishing (note that astronomy is a leader in the field); bibliographic and full text databases of astronomical literature; and reports on collaborative projects.

The A&A authors have the possibility of being identified with non-Roman alphabets, such as Chinese, Japanese, Cyrillic characters (November 2013)

A&A offers authors the possibility of being identified with non-Roman alphabets, such as Chinese, Japanese, Cyrillic characters. These names will be in parentheses after the English names displayed in the print issue and the online PDF.
(see specific instructions here)

EDP Sciences and the editorial board of A&A has the pleasure to announce that all Astronomy & Astrophysics articles are now in open access ONE year after their publication date, rather than two years. The main objective is timeliness of dissemination to scientists, while maintaining the quality of the information. 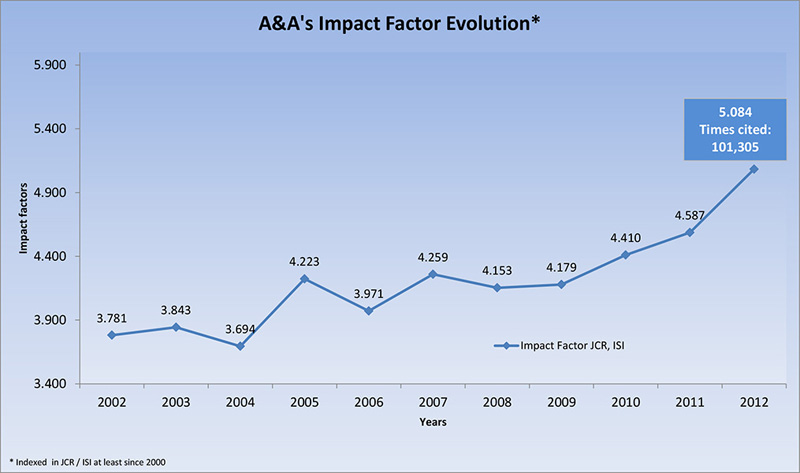 A&A has a booth on the XXVIII General Assembly of the IAU held in Beijing from 20 to 31 August and is the sponsor of the poster session.

A&A is also part of the “Workshop for Journal Authors and Referees” at the XXVIII General Assembly of the IAU. 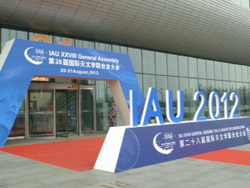 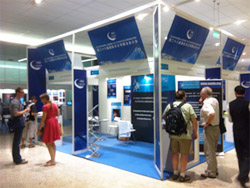 Announcement from the A&A Board of Directors: Call for Candidates for Letters Editor-in-Chief of A&A (September 2012)

The Board of Directors of A&A invites applications for the position of Letters Editor-in-Chief, which will become vacant on 1 February, 2013.

Candidates are expected to have a broad and strong record of published influential research in astronomy and astrophysics, and previous experience in scientific publishing. The successful candidate will show a strong interest in developing and promoting the Journal, and will also possess the interpersonal skills needed to work closely together with a team of Editors.

Support for office equipment and secretarial help, as well as an annual indemnity, is provided for this position. The initial term of appointment is four years.

Applicants should submit a curriculum vitae, a list of publications, and a letter of intent summarising the candidate’s qualifications and motivation for seeking the position of Letters Editor-in-Chief. Possible support for the task from the candidate’s home institute in terms of equipment, office space or personnel should also be outlined in the application.

Dr. Birgitta Nordström
Chairperson, Board of Directors of Astronomy & Astrophysics 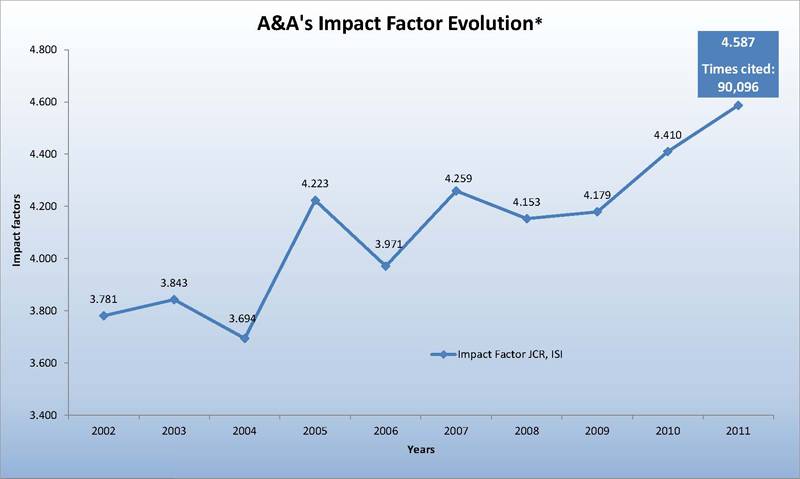 The major astronomical journals in North America and Europe are co-sponsoring a workshop for journal authors and referees at the XXVIII General Assembly of the IAU. The workshop is aimed mainly at young astronomers and astronomers from Asian and developing countries.

The workshop will extend over one full day. It will be repeated on four different days during the General Assembly: Wednesday 22 August, Friday 24 August, Monday 27 August, and Wednesday 29 August. The content of the workshop on each of the days will be identical. 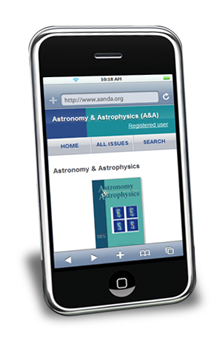 All visitors using either their smartphone or their tablet device will be automatically redirected to the mobile version of the Astronomy & Astrophysics website.

The mobile A&A site offers an easy access to current and archive content, and a quick search function.

Subscribers can now view content in a format designed specifically for their mobile device.

Astronomy & Astrophysics is proud to inform you of its poster sponsorship of the IAU General Assembly which will be held in China, Beijing, from August 20-31, 2012.

IAU's General Assembly, held every three years, will bring together an expected 3,000 astronomers from all over the world to China and Beijing to present and discuss the latest breakthroughs in astronomy.

Attendance at the IAU XXVIII General Assembly (GA2012) is open to all Individual Members of the IAU. Students of astronomy and professional astronomers who are not IAU-members are equally welcome to attend. Upon submitting their registration, they will be issued an invitation from the IAU.

Ilkka Tuominen In Memoriam (May 2011) 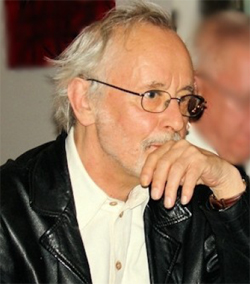 It is our sad duty to announce the sudden loss of the Finnish representative to the A&A board from 1998 until his death on March 19, 2011, at his home in Helsinki.

Illka Tuominen is a well-known astronomer, who was deeply appreciated for his achievements in Finland and internationally as described in detail by here.

Announcement from the A&A Board of Directors: Call for candidates for Editor-in-Chief of A&A (May 2011)

The Board of Directors of A&A invites applications for the position of Editor-in-Chief, which will become vacant on January 1, 2012.

Candidates are expected to have a broad and strong record of published influential research in astronomy and astrophysics, and previous experience in scientific publishing. The successful candidate will show a strong interest in developing and promoting the Journal, and will also possess the interpersonal skills needed to lead the editorial team and handle the occasional conflicts that occur during the peer-review process …