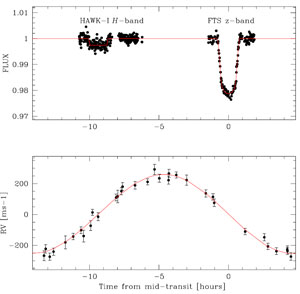 WASP-19b is an inflated Jupiter-mass planet orbiting its star (a solar analog with magnitude V=12.3) in a mere 19 hours. Anderson et al. used HAWKS-I VLT observations of the system to achieve the first ground-based detection of thermal emission from an exoplanet in the H-band, around 1.6 microns. Their detection of the planet's secondary transit (i.e. behind the star) yields a flux that is twice higher than predicted by atmospheric models and shows that heavily irradiated atmospheres are complex and not well understood. The possibility of extremely accurate visible and infrared photometry from the ground opens up new possibilities of characterizing exoplanets in the near future.