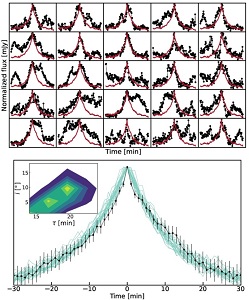 The more than a million solar masses black hole at the center of our Galaxy, Sagittarius A* (Sgr A*), shows recurrent, puzzling flares at near-infrared (NIR) and X-ray wavelengths. These flares are thought to originate from blobs (i.e., overdensities) in the innermost accretion disk regions, close to the black hole, where general relativistic effects play a role. This inference comes from the flares’ short duration (approximately half an hour) and brightness. In this Letter, von Fellenberg et al. analyze 25 NIR flares (detected by the Spitzer satellite) and 24 X-ray flares (detected by the Chandra satellite) using a principal component analysis methodology. Despite the apparently different shapes of the light curve flares, the authors were able to find an underlying common shape, which is symmetric in the rise and fall. The fact that the flare shape is symmetric is important because it implies that relativistic effects play only a minor role. This can only happen if we are viewing the disk at a low inclination angle (~30 deg).