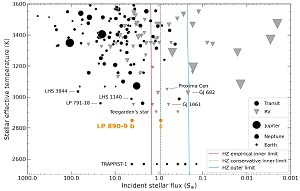 Atmospheric characterization of temperate terrestrial exoplanets as possible siblings to Earth is one major goal of modern astrophysics. In this quest, Earth-size planets transiting late-type M dwarfs are targets of choice, as signal-to-noise ratio of putative atmospheric spectral features probed by transit and eclipse spectroscopy are enhanced for smaller and cooler host stars. These considerations were at the basis of the SPECULOOS project (Search for habitable Planets EClipsing ULtra-cOOl Stars), an exoplanet transit survey of about 1700 late-type dwarfs with spectral type M6 and later within 40 pc, using an array of four 1-m class telescopes at Cerro Paranal. In 2016, the Trappist South telescope, a prototype of SPECULOOS, discovered the unique TRAPPIST-1 system, consisting of seven temperate Earth-sized planets transiting a nearby (12 pc) M8V star, and since then, only two transiting planetary systems around M dwarfs with type M5 or later have been detected. Delrez et al. here report the detection/validation of two terrestrial planets (R = 1.32- 1.37 R_o) around LP 890-9, the second coolest (M6, Teff ~ 2850 K) star to host planets. The first planet, LP 890-9b (period = 2.73 d, a = 0.019 au) had been discovered by TESS and is now validated by SPECULOOS and complementary photometry. Most remarkably, SPECULOOS reveals a second planet (LP 890-9c, period = 8.46 d, a = 0.040 au). With an stellar irradiation of 0.91 S_o, this planet, also identified as SPECULOOS-2c, lies within the conservative habitable zone, very near to its inner (runaway greenhouse) edge. The two planets are close to (but not exactly in) 3:1 mean motion resonance and in a dynamically stable state (assuming no other planets in the system). While the masses of the two planets are still to be determined, it appears that in terms of transmission spectroscopy, LP 890-9 c is among the very most favorable habitable-zone terrestrial planets, being surpassed only by the TRAPPIST-1 planets, and due to its location near the inner edge of the habitable zone, it may harbor an H2O-rich atmosphere.