Convective inhibition with an ocean. I. Supercritical cores on sub-Neptunes/super-Earths

Convective inhibition with an ocean. I. Supercritical cores on sub-Neptunes/super-Earths 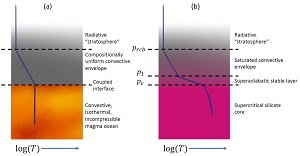 In an atmosphere that contains a condensable species whose molecular weight exceeds that of the background gas (e.g., H2O in an H2-He dominated atmosphere), convection may be inhibited by the fact that a rising parcel of moist air may contain more heavy gas than its surroundings, leading to negative buoyancy despite the parcel's higher temperature. This phenomenon, which is relevant to Solar System giant planet tropospheres, may lead to the formation of a stable radiative layer near a cloud condensation level. Exoplanetary super-Earths and sub-Neptunes present a different physical situation: a low-mass envelope overlying an "infinite" volatile reservoir in the form of water or magma oceans. Markham et al. examine the physics of convection in such cases, generalizing the theory of convective inhibition and applying it to water-hydrogen systems (documented by thermodynamical data) and silicate vapor-hydrogen systems. Despite the lack of relevant experimental data on supercritical rock-gas mixtures, they show that convective inhibition is likely to occur on silicate planets with envelopes in the range 10-3-10-1 Earth masses. They find that, as a consequence of the existence of an approximately 100 km thick stability layer at depth, the objects' luminosity rapidly drops after planet formation, but then stays roughly constant over possibly billions of years, maintaining a much hotter interior and core and expanding the cooling timescale by a factor of ~5 compared to the fully convective case. While these results need to be substantiated by laboratory measurements or more detailed numerical simulations, they invite a rethinking of the interior of super-Earths and sub-Neptunes, with possible implications for the interpretation of their luminosity, radius, and other aspects, such as magnetic field generation.