Detection of OH in the ultra-hot Jupiter WASP-76b

Detection of OH in the ultra-hot Jupiter WASP-76b 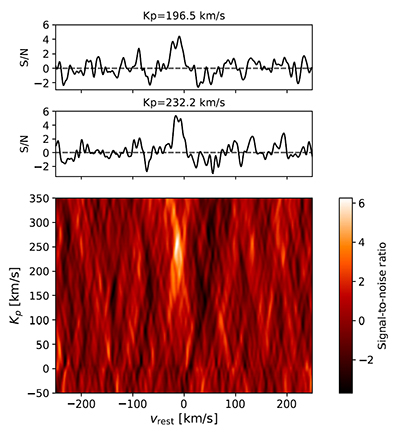 Ultra-hot Jupiters (e.g., WASP-33b, WASP-76b, WASP-121b, and KELT-9b) are planets that orbit hot stars (A, F) at extremely short distances. Due to the huge irradiation they receive from their host stars, which is thousands of times stronger than the insolation at Earth, they have effective temperatures in excess of 2000 K. As a consequence, their upper atmospheres are presumably bloated and subject to intense escape, and most molecular species are expected to be thermally dissociated into their atomic constituents, at least on the day side. Indeed, a wealth of atomic species have previously been detected in these objects, while molecular detections have been very scarce. From archival high-resolution transmission spectroscopy data from CARMENES, and using the well-proven technique of cross-correlation, Landman et al. report on the detection of the radical OH in WASP-76b, an ultra-hot Jupiter orbiting an F7V star with an orbital period of 1.8 days and an equilibrium temperature of ∼ 2160 K. This is the second ever detection of OH in an exoplanet, following its recent discovery from emission spectroscopy of WASP-33b. Unlike in cool Solar System atmospheres (Earth, Venus, Mars, comets), where OH is produced from photolysis of H2O, the main OH production mechanism in ultra-hot Jupiters must be from the thermal dissociation of water, which has previously been detected in the case of WASP-76b (but not clearly in WASP-33b). The OH signature, detected at a S/N of ~ 6, shows a large (-13 km/s) blueshift, which may result from the combination of a signal predominantly originating from the evening terminator and the presence of strong day-to-night winds. A similar scenario has recently been put forward to explain the asymmetric iron absorption on this planet.