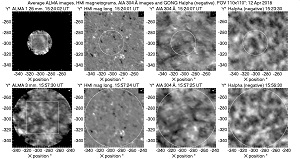 The chromosphere, which is the layer from which most of the solar radiation at millimeter wavelengths is emitted, is probably the least understood layer of the solar atmosphere. This is true even for the quiet chromosphere (that is, outside strong magnetic field concentrations). In this article the authors used high spatial and temporal resolution ALMA observations of a quiet Sun region at 1.26 and 3 mm and addressed the variability in the quiet chromosphere with a focus on the study of spatially resolved oscillations and transient brightenings, that is, small, weak events of energy release. Both phenomena may have a bearing on the heating of the chromosphere. Their study demonstrated that most fluctuations at 1.26 and 3 mm were related to p-mode oscillations with similar rms at both wavelengths. The oscillations were ubiquitous and provided more than 60% of the total fluctuations. The removal of oscillations from the data revealed several transient brightenings. All of them showed gradual rise and fall time profiles, and only a few had 1600 or 304 \AA\ counterparts. The combined power per unit area of the transients in the two ALMA bands was more than two orders of magnitude smaller than the chromospheric radiative losses. The minimum energy of the 1.26 mm transients was among the smallest ever reported, irrespective of the wavelength of observation, and their occurrence rate per unit area was higher than that of the 3 mm events.