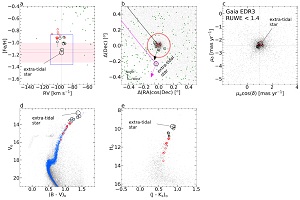 Metal-poor nitrogen-enriched stars are suited for chemical tagging and play a crucial role in reconstructing the formation and evolutionary history of the Milky Way. The authors studied the globular cluster NGC 6723 in the central region of the Milky Way with high resolution spectroscopy as part of the APOGEE-2 survey. They serendipitously discovered a star, 2M18594405-3651518, located outside the cluster (near the tidal radius) but moving on a similar orbit. Abundance analysis shows that nitrogen is enriched, and the abundances of the star agree with that in globular clusters. This means that the star has been recently ejected from the cluster, providing the first piece of evidence that some of the nitrogen-enhanced stars in the bulge likely originate from the tidal disruption of globular clusters.