The solar gravitational redshift from HARPS-LFC Moon spectra. A test of the general theory of relativity (Gonzalez Hernandez et al.)

The solar gravitational redshift from HARPS-LFC Moon spectra. A test of the general theory of relativity 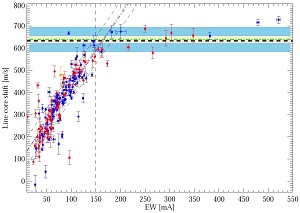 The general theory of relativity predicts that the wavelengths of solar spectrum lines should be shifted redwards compared to laboratory wavelengths by about 633 m/s in velocity scale. However, the competing blueshift due to granulation phenomena produced by convection makes an accurate observational test of this prediction extremely challenging. This paper presents the most accurate measurement of the solar gravitational redshift to date. The authors employed the laser frequency comb calibration system attached to the HARPS spectrograph on the ESO 3.6 m telescope at La Silla and observations of the sunlight reflected off the moon. State-of-the-art 3D hydrodynamical models of the solar atmosphere were then employed to analyze the spectral lines and measure an accurate gravitational redshift value, which is in full agreement with the theoretical prediction.