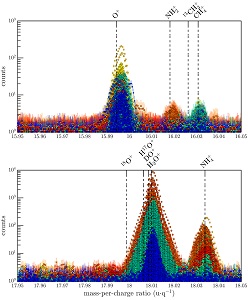 Popularized as the "cometary Zoo,” the richness of cometary neutral composition has been revealed at comet 67P Churyumov-Gerasimenko by the ROSINA instrument on board ESA's Rosetta mission. The ionization of neutrals by extreme ultraviolet radiation and energetic electrons produces cometary ions, whose subsequent reactions and collisions with neutrals may further enrich ion composition. Cometary atmosphere ionosphere models have thus predicted a whole suite of cometary cations, but remote sensing detections have been relatively scarce, and earlier in situ mass spectrometry on Giotto had insufficient mass resolution to distinguish between ion species of a similar mass. The situation has dramatically changed with the operation of ROSINA at comet 67P with a mass resolution of up to 3000, permitting, for example, one to distinguish 13C+ from CH+. Here, Beth et al. report on the detailed composition of the ionosphere of comet 67P, establishing the presence of many predicted catio! ns such a s CH_m+ (m = 1-4), H_nO (n=1-3), O+, Na+, and several ionized and protonated molecules (e.g., C2H4+, C2H5+, and CH3OH2+). A particular highlight is the discovery of CO2++, which was produced by the direct ionization of CO2, which represents the first detection of a molecular dication in any gas envelope in the Solar System.