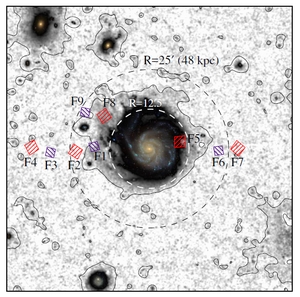 Cosmological models of galaxy formation show that disk galaxies are embedded in extended stellar halos. However, previous studies of some disk galaxies have failed to detect this stellar component. This was the case of the prototypical disk galaxy M101, for which it has been suggested that it lacked this stellar halo component. In using optical imaging with the Hubble Space Telescope (HST), it is now possible to resolve M101 stars and map their halo out to 70 kpc from the center. The new color-magnitude diagrams reach down to two magnitudes fainter than the tip of the red giant branch (RBG). This allowed HST to trace the M101 halo component down to very faint surface brightness (μg ≈ 34 mag arcsec−1). The stellar population is found to be similar to that of metal-poor globular clusters in the Milky Way based on the mean color of the RGB stars. The HST star counts also allowed the authors to measure the total halo mass of M101, which is small in comparison to! Well studied galaxies, such as the Milky Way or M31. Indeed, the comparison with the other six galaxies from the same survey shows that M101 has an anemic stellar halo.