The path to instability in compact multi-planetary systems

The path to instability in compact multi-planetary systems 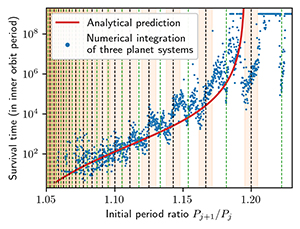 Three or more compact planetary systems can become unstable on timescales of up to billions of years. Predicting their stability is challenging and numerically expensive due to the chaotic dynamics, and, until now, there has been no theoretical understanding of the nature of the mechanism driving the instability. Based on numerical simulations, it had been postulated that the system's survival time follows an exponential trend in the planet orbital separation measured in units of Hill radii. Contrary to a constant diffusion process, planetary systems seem to remain dynamically quiescent for most of their lifetimes prior to a very short unstable phase. In this work, Petit and colleagues study a two-phase mechanism in which the slow chaotic diffusion due to the overlap of three-body resonances dominates the instability timescale prior to a rapid scattering phase triggered by the crossing of a two-planet mean motion resonance. They obtain an analytical estimate of the survival time that is consistent with numerical simulations over four orders of magnitude for the planet-to-star mass ratio, and six to eight orders of magnitude for the instability time. They also confirm that measuring the orbital spacing in terms of Hill radii is not suitable and that the correct spacing unit scales have a flatter dependency in the planet mass. Their model reproduces the observation that the survival time increases beyond a certain spacing since the three-planet resonances do not overlap.