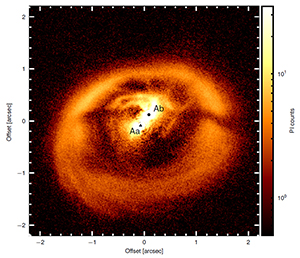 A large fraction of stars are found in multiple systems. More than 4000 detections of extrasolar planets around single stars raise the question as to if and how planets in binary systems may form. Since protoplanetary disks are the birthplaces of planets, thus dictating the initial conditions, their characterization is crucial to understanding the planet formation process. Unlike single star systems, numerical simulations predict that the gravitational impact of the central binary will severely perturb its surrounding disk, leading to the formation of a gap through which material in the form of streamers will feed the central stars. New high-resolution scattered-light observations of GG Tau A, one of the most massive and largest circumbinary protoplanetary disks, reveal binary-disk interactions in unprecedented detail. The disk shows evidence of a large gap, several shadowed regions, spiral structures, as well as streamer-like filaments connecting the outer disk and the central binary. These filaments are possibly generated by periodic perturbations from the binary, tearing off material from the inner edge of the outer disk once per orbit as predicted by numerical simulations.